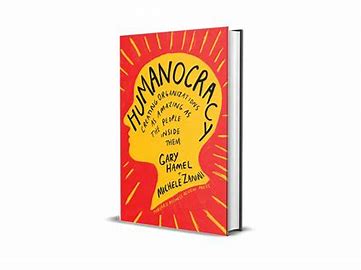 What is important about this book?
Humanocracy is the latest work by Gary Hamel, this time supported by Michele Zanini, co-founder of The Management Lab.
The best takeover of this book is the Business Case against bureaucracy, which represents a model based on data that can be used by all organizations.
The authors examine the elements that current trends have in common, such as the fact that recently most organizations have created value exclusively for the highest paid jobs. Thus, they identify as a central challenge for the success of “humanocracy” the theme of improvement regarding the so-called “low-skilled jobs”.
For those who want to focus on the human factor in their organization, the fundamental question is: “What kind of organization creates and deserves the best that human beings can give?“

Quotes
What makes a low-skilled job is not the nature of the job it entails or the credentials required, but whether or not the people doing the task have the opportunity to increase their skills and tackle new problems

Our organizations, despite all efforts to improve them, are inertial, incremental and unexciting

Structure and contents of the book
The authors do not suggest an organizational model, but they focus on improving the expression of self and of the responsibility given to workers. This kind of responsibility works as a  tool that allows them to demolish the most pernicious aspects of bureaucracy, which is identified by the presence of some common elements, such as:

They also note that most organizations lack resilience, creativity and passion. These are all common traits of human beings, but they are interpreted as scarce among employees by the bureaucratic attitude.

The third chapter is the most interesting, as it builds the business case against bureaucracy. There are probably few people around who would defend this system, yet so far there has been little evidence of the total cost of “incompetence” created by bureaucrats.
The authors propose a tool (the Bureaucratric Mass Index) which, with only 10 questions, can focus on the cost of bureaucracy. It is also possible to check the level of your organization’s bureaucracy directly online, knowing that, on a scale from 0 (no bureaucracy) to 10, the average score is 6.5.
The book is full of cases and evidence of companies that have transformed themselves by substantially reducing the impact of bureaucracy and truly putting employees first in their strategies. Thanks to the analysis of realities such as Nucor, Michelin, Haier, Vinci, Svenska Handelsbanken, and many others, the authors identify what is for them the DNA of Humanocracy which, in summary, includes:

Conclusion
Humanocracy provides many consistent considerations on how to build an organization focused on humans, without suggesting a specific alternative model.
It is in line with our opinion: we need to be intentional in designing an organization and think about all of its components consistently and most importantly, we need to make sure we put principles first and derive from there how our organizations can generate impact.
This is a valuable book not just for some enlightened CEOs, but for any person who feels they want to work towards improving the way we work.
Humanocracy paints a possible itinerary with multiple scenarios in front of us and invites us to start the journey.

Thanks to Sergio Caredda for sharing this review, which already appeared on his website  www.sergiocaredda.eu